1. Create a System Image Before the Application Installation

The Setup Capture wizard starts the capture process by scanning the system to assess the environment and create a baseline system image.

Therefore, a clean Windows machine must be used to avoid the application installer to skip files and registry keys already present on the machine.

Create a system image before the application installation 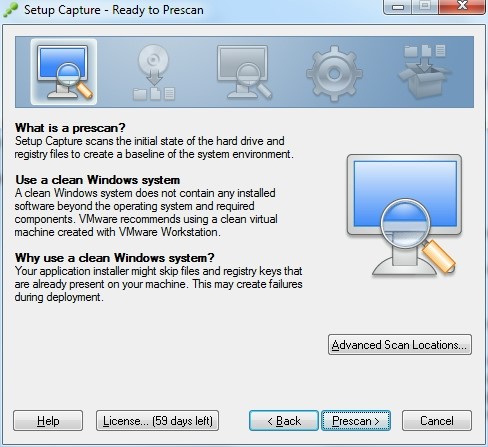 2. Rescan the System with the Installed Application

You can install the application to virtualize before the Setup Capture wizard rescans the system and assess changes from the initial system image.

Install the application and rescan the system 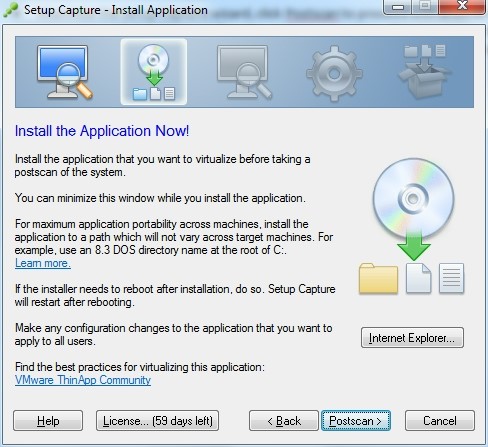 3. Defining Entry Points as Shortcuts into the Virtual Environment

During the build process that occurs at the end of the Setup Capture wizard, ThinApp generates one executable file for each selected entry point. If you deploy the application as an MSI file or use the thinreg.exe utility, the desktop and Start menu shortcuts created on user desktops point to these entry points.

Debugging an application might involve the following entry points:

If you cannot predict the need for debugging or troubleshooting the environment, you can use the Disabled parameter in the Package.ini file at a later time to activate these entry points.

You can use VMware Horizon Application Manager to manage the deployment and entitlement of ThinApp packages.

Usually, that option is not used; clients prefer tools like LANDesk or SCCM

ThinApp can use Active Directory groups to authorize access to the virtual application. You can restrict access to an application to ensure that users do not pass it to unauthorized users. 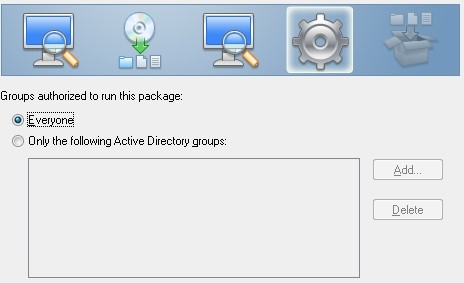 Isolation modes determine the level of read and write access to the native file system outside of the virtual environment. You might adjust isolation mode settings depending on the application and the requirements to protect the physical system from changes.

The selection of isolation modes in the capture process determines the value of the DirectoryIsolationMode parameter in the Package.ini file. This parameter controls the default isolation mode for the files created by the virtual application except when you specify a different isolation mode in the ##Attributes.ini file for an individual directory.

The selection of a directory isolation mode does not affect the following areas:

Applying Merged Isolation Mode for Modifications Outside the Package

With Merged isolation mode, applications can read and modify elements on the physical file system outside of the virtual package. Some applications rely on reading DLLs and registry information in the local system image.

The advantage of using Merged mode is that documents that users save appear on the physical system in the location that users expect, instead of in the sandbox. The disadvantage is that this mode might clutter the system image.

When you select Merged isolation, ThinApp completes the following operations:

Applying WriteCopy Isolation Mode to Prevent Modifications Outside of the Package

Although this mode might make it difficult to find user data files that reside in the sandbox instead of the physical system, this mode is useful for locked down desktops where you want to prevent users from affecting the local file system.

When you select WriteCopy isolation, ThinApp completes a number of operations: 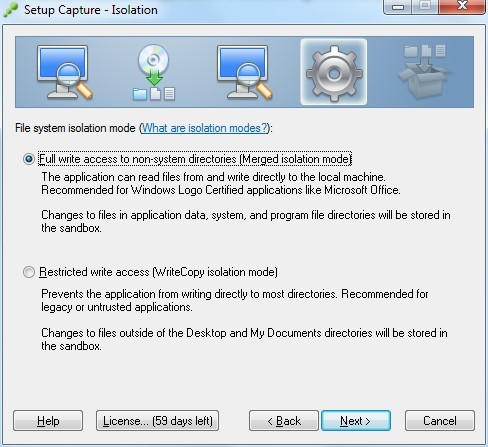 7. Storing Application Changes in the Sandbox

The sandbox is the directory where all changes that the captured application makes are stored.

The sandbox is runtime modification storage and is not a cache. The next time you open the application; those changes are incorporated from the sandbox.

When you delete the sandbox directory, the application reverts to its captured state. You might delete a sandbox when an application has a problem and you want to revert the application back to the working original state.

You can deploy the sandbox to: 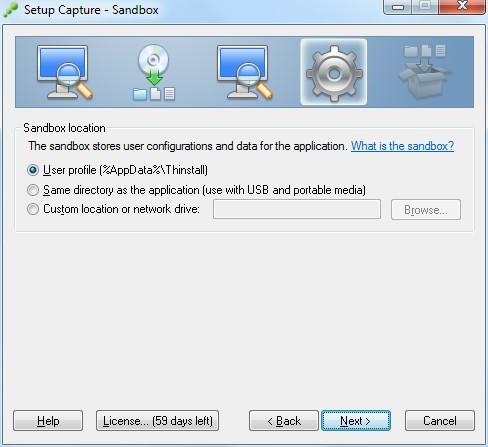 To improve ThinApp support for applications, VMware uses the capture process to confirm whether to collect anonymous data about deployed ThinApp packages. 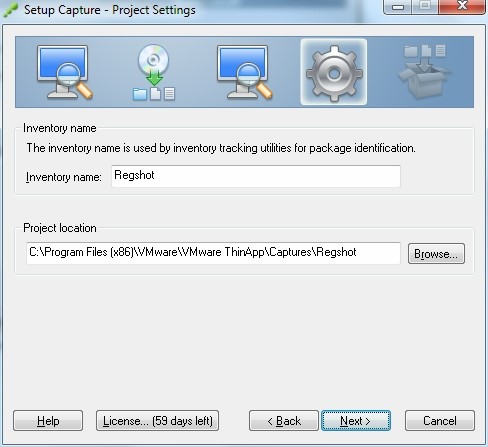 The package is built from the project files, it’s a .exe or .msi file used to run or deploy an application.

The primary data container is the main virtual application file that includes the ThinApp runtime and the read-only virtual file system and virtual registry. It is a .exe or a .dat file.

To identify the primary data container after you capture an application, check the ReadOnlyData parameter in the Package.ini file.

You can capture an application and deploy it as an MSI Windows installation package. The MSI installation places the application in the C:\Program Files directory.MSI packages automate the process of registering file-type associations, registering desktop and Start menu shortcuts, and displaying control panel extensions.

Compressing Packages in the Capture Process

Compressing a package in the capture process decreases the size of an executable package but does not affect MSI packages. Compression can reduce the on-disk storage requirement by 50 percent but slows the application performance when ThinApp uncompresses initial blocks. 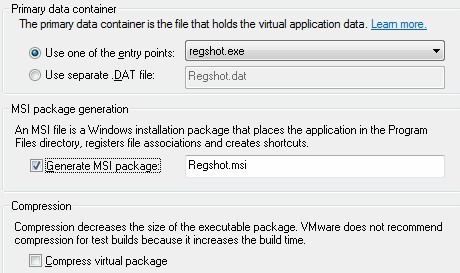 By clicking the Save button, the Setup Capture tool create projects files before creating the package.

It is preferable to save that project files before creating the package. Saving the projects files allows using them later if you want to modify the package (for troubleshooting for example).

You can adjust project files and build the application for deployment.

Click Build to build an executable package or MSI package containing the files you installed. 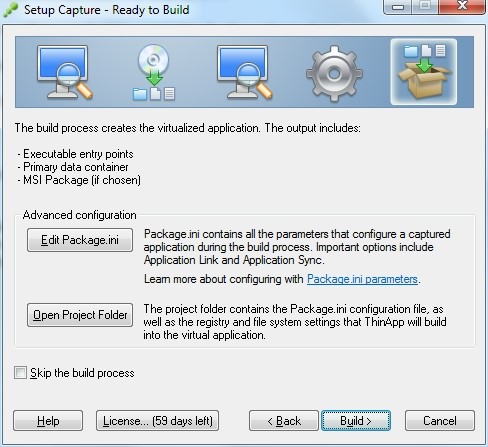 The package is created in the bin folder.

You can rebuild the package at any time to make changes with the build.bat file in the virtual application folder.

You can modify the Package.ini file to update the overall package. The file resides in the captured application folder. The following parameters are a few examples of settings that you might modify:

Double-click the build.bat file in the captured application folder to rebuild the application package.

Application Link is a feature that connects dependent application packages at runtime. This allows the administrator to build relationships between packages without using Setup Capture to package all needed components into a single package. Component packages are often more efficiently packaged, deployed, and updated separately.

Create links between packages for the following scenarios:

Follow the process below to set up the link.

The determination of centralized versus de-centralized deployment depends on the execution mode of the package.

One of the decision points for virtualizing applications with VMware ThinApp is to choose which execution, or delivery, mode is appropriate for users, groups, and applications. There are two primary modes of delivery:

Streaming execution mode allows the application to be centrally stored and accessed by multiple users. It is a one-to-many model that provides centralized deployment and update of the application package to multiple end users for execution via a Windows desktop shortcut.

The user must always have access to the central network location where the ThinApp streaming packages reside.

The storage location that hosts the applications must be highly available. The path through the network between the client device and the central network location must be robust.

The actual location of the package can be on the local file system or a USB device. In this distributed model, each client device receives the package locally and therefore can run the application regardless of network connectivity.

Integrate the delivery of packages, which can be large .exe or .msi files, with your existing organizational process. An existing process, such as Active Directory publishing via Group Policy, will have an already established support structure and administration workflow. You can use Group Policy to deploy software to groups, organizational units, or individuals.

After the application package is delivered, application performance and availability is not subject to network or storage dependencies.

For the virtualized application to read files and registry keys and write their virtual equivalent in the package, the right isolation mode must be implemented.

ThinApp configures the isolation mode automatically but it can be specified manually by the packager.

The global isolation mode can be set within a parameter in the package.ini file :

The isolation mode can also be set individually for all folders and subfolders within the ##Attributes.ini file in all of them.

Regarding registry keys, the isolation mode can be set individually for each key at the start of the corresponding line in the registry text files at the root of the project.

Sbmerge.exe is useful to add modifications to an existing package without making a new capture.

To modify an existing package:

DLL_Dump.exe lists all running ThinApp packages and shows for each of them:

This can be helpful for troubleshooting…